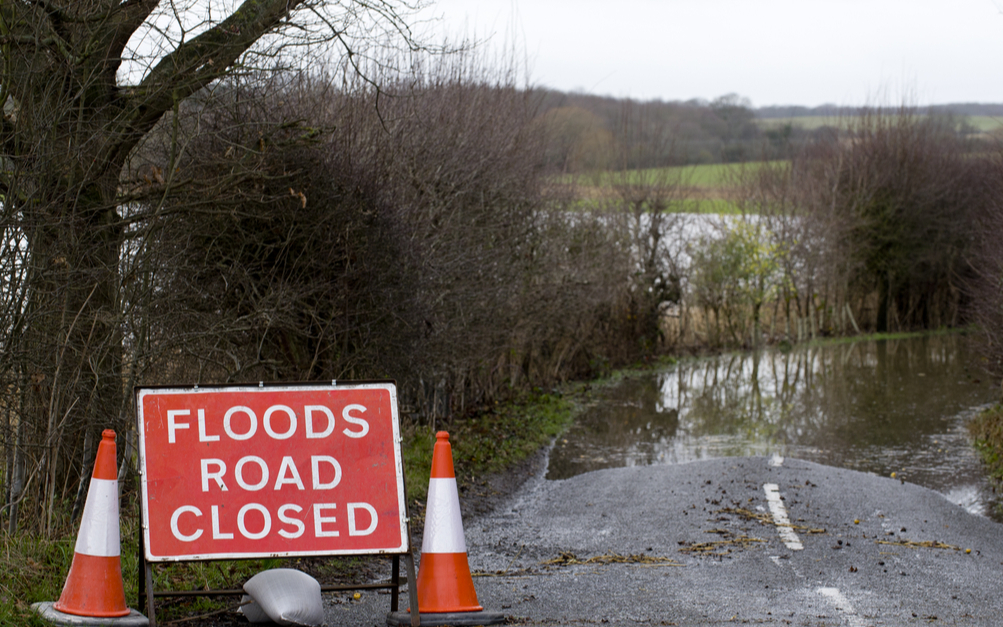 Winter Flooding: Know Your Risk and How to Prepare and Respond

When most people hear the word “flood,” they think of rivers overflowing their banks in the springtime and of tropical storms that thrash the Atlantic and Gulf coasts in late summer and early fall. But flooding is a year-round risk that doesn’t end when winter arrives. Across the country, winter is a season of heavy snowfall, rapid snowmelt and intense rainstorms that can lead to flooding — and put property and lives in peril.

The winter months of 2018 were a case in point, when many areas of the country experienced unusually severe flooding.

The East Coast faced not one but two historic “bomb cyclones”— a catch phrase used to describe a strong low-pressure weather system that intensifies rapidly. The first storm pummeled the East Coast in early January, dropping snow from Georgia to New Brunswick, with Boston bearing the brunt of the impact in the Northeast. Seventeen inches of snow fell on the city, and a storm tide reaching over 15 feet flooded the downtown area, submerging roads with icy water and forcing some people to evacuate their homes. The second storm on March 2 also brought hurricane force winds as well as heavy rains to coastal New England, once again submerging Boston streets and those of nearby towns in floodwaters.

Also in January, torrential rain caused flooding in the west, including Southern California, which led to the death of at least 21 people, and coastal towns in Oregon and Washington. Unusually heavy rains inundated parts of Las Vegas and the surrounding valley, which until that point had been experiencing record drought.

In February, a combination of rainfall and rapid snowmelt in the Midwest brought many rivers from Chicago to Houston to flood stage. The Grand River in Grand Rapids, Mich. reached above 20 feet, more than two feet higher than flood stage. States of emergency were declared in 17 counties along the Ohio River due to high water and storm damage.

Winter flooding is a countrywide risk, but its cause depends on where in the country you live.

Along coastal areas, including the Great Lakes, storms bearing snow, heavy rains and strong winds can cause water levels to rise, which can lead to flooding and beach erosion, especially when the storm’s arrival coincides with a high tide. The East Coast is particularly susceptible, where storm systems known as nor’easters — large, low-pressure areas whose winds come from the northeast — can lead to coastal flooding from the Mid-Atlantic states to the Northeast. Nor’easters occur every year, but climate models are showing an increase in extreme precipitation during the winter across the Northeast and a corresponding increase in the potential for flooding.

Sudden thaws of heavy snow and ice are another cause of winter flooding. Snowmelts can release huge amounts of water in short periods of time, and frozen ground prevents the melt water from penetrating the ground and being absorbed. As a result, the runoff can cause streams and rivers to overflow their banks. Snowmelt contributes to riverine flooding in many areas, particularly the Northeast, northern Midwest and some areas in the West. It is a common cause of flooding all along the Mississippi River.

Winter is the rainy season for the Western U.S. when Pacific storm systems move inland and bring the potential for heavy rains. Cold-season precipitation is the main supply of water to rivers in the region and for people living in this portion of the U.S. But winter rains can also lead to intense flooding and mudslides that cause millions of dollars in property damage year after year.

Flooding is a natural occurrence and to be expected during the winter season. To protect your home, make an annual practice of inspecting these areas of your property and taking preventive action before winter’s extremes of cold, snow and rain are upon you:

Once the Snow Falls

Newly fallen snow produces roughly one-tenth its volume in water, so every 10 inches of melted snow produces the equivalent of one inch of rain. If you have two or three feet of fallen or drifted snow against your house, a warm day, especially with rain, can release a large volume of water that can affect your foundation and basement.

To prevent snowmelt from flooding your home, clear snow at least one to two feet away from all sides of the foundation, especially near basement windows and around downspouts.

Also remove excess snow from your roof using a roof rake designed specifically for this purpose (a regular rake can damage the roofing materials). Keeping your roof and eaves clear of snow will help prevent ice dams that can form and drive water into your attic, ceilings and walls, sometimes causing extensive damage.

Even the most comprehensive preventive measures may not fully protect your home in the event of a winter flood, especially if it’s severe. But your first priority in the event of a flood event should always be your own safety and that of your family.

Cleanup After a Winter Flood

The longer moisture remains in your home, the more damage it can cause. Begin cleanup as soon as you safely can:

Flood cleanup can be a daunting task. If the flooding is extensive or you see mold or mildew developing, you might consider bringing in a flood remediation specialist to handle the cleanup for you.

According to Floodsmart.gov, just one inch of water in a home can cost more than $25,000 in damage. Insurance can help protect your property from flood damage during the winter and every other season of the year. It’s important to know that your standard homeowners or rental insurance policy does not include this critical protection; flood insurance is available through the National Flood Insurance Program. Typically, there’s a 30-day waiting period after you sign the contract before the policy goes into effect, so be sure to buy flood insurance before the threat of flooding is imminent.